Background: According to the World Health Organization (WHO), adolescence is a transition period in which growth and development occur greatly improved both physically and psychologically. Dysmenorrhea is a complaint of teenage girl who often appear during menstruation. Dysmenore can be done pharmacologically and non pharmacologically. Exclusively by non pharmacological, one of them using herbal medicine by fennel fruit extract. This research tries to study the effectiveness of consuming fennel extract in reducing dysmenorrhea among teenage girls. Methods: The research method using quasy experimental design with the research design of two pretest-posttest design groups. The population is all teenage girls in SMPN 4 Mojosongo who take 116 female students. The sampling technique was purposive random sampling, using Slovin formula which obtained a sample of 54 respondents divided into two groups, each contains 27 respondents. Instrument test using Face Scale Rating Scale (FRS). Data analysis techniques that used are the Wilcoxon Signed Rank Test and the Mann-Whitney Test. Results: There was a significant decrease in dysmenorrhea both in the intervention group that was given fennel fruit extract (mean = 2.15; p = 0.001 <0.05) and in the control group (average = 0.37; p = 0.025 <0.05). The decrease that occurred in the control group was significantly greater in the control group (p = 0.001 <0.05). Conclusion: fennel fruit extract is effective in reducing dysmenorrhea in young women at SMPN 4 Mojosongo, Boyolali Regency. 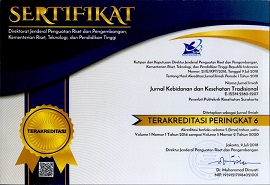